Paço de Calheiros is a majestic VIII century Manor House located on the Hills steps on the river Lima Valley in the North of Portugal, surrounded by vineyards of the Vinho Verde Loureiro, which is produced in the Estate.
The view over the Valley is breath taking and the guests are more the welcome to explore and discover the property and its surroundings which are classified as “Historic Gardens” and Monument of National Interest.
The Count of Calheiros, Francisco de Calheiros, welcomes the guests with the warm hospitality of the North of Portugal, which is famous for its welcoming people.
The Calheiros family has lived in this land for seven hundred years, and invites you to come and discover this piece of heaven.
Envoy the beautiful estate, taste our wine Vinho verde, walk on the vineyards or the wonderful chestnut woods and beautiful hills around the estate, rich with nature.
Relax in the SPA, the pool or tennis court with breathtaking views over the valley.
You can also take part in one of our cooking lessons and learn the traditional dishes of the region with ingredients form the vegetable garden.
We do not call ourselves hotel or boutique hotel because we are much more that.
We are a family house which is proud to welcome guests as friends and share the way of life of this region, a living experience of culture and traditional habits of Alto Minho.

We are part of the historic manor house network Solares de Portugal. 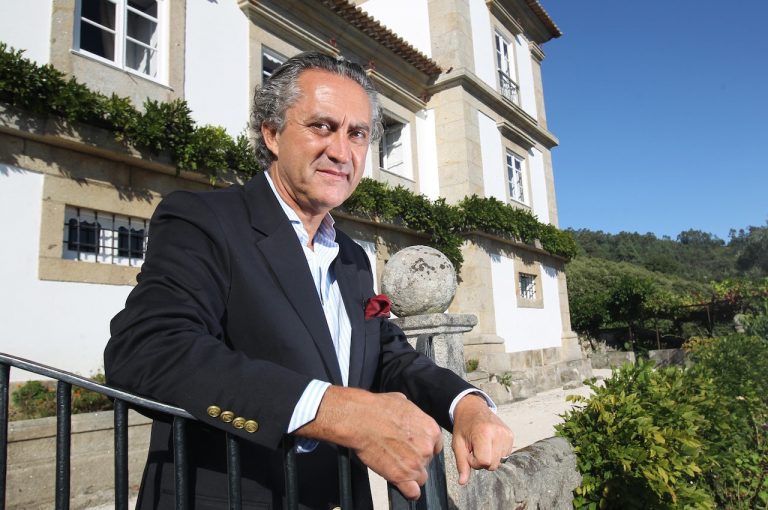 MORE About our GUESTS

Our bedrooms are decorated with Portuguese furniture some dating back to the 16th Century, with influences from the former Portuguese Empire across the world.

You can enjoy and sleep on the bed of Queen Carlota Joaquina, Queen of Portugal and Empress of Brazil in the VIII century, or the furniture that General Junot prepared to accommodate Napoleon in the Convento de Mafra.

The bedrooms are prepared and equipped with the most modern comforts and facilities, which bring the ideal combination between history and modern times.

“Staying in Calheiros is going back to the time where everything was as it’s suposed to. The water is fresh from the mountains, the fruits and vegetables from the garden and even the bread is made in the same wood fired oven as our great grandparents.”

We also have available a Spa, tennis court and swimming pool, and beautiful woods that surround the estate that are astonishing for walks.

The Majestic view from the swimming pool and over the Lima River Valley, at the Heart of the North of Portugal, brings you one of the most beautiful sceneries in the world.

Paço de Calheiros stands in the Portuguese medieval road to Santiago, and in the old days sheltered and protected many pilgrims.

Nowadays, still serves this function welcoming many pilgrims by foot, horse or bicycle that stay in the manor and enjoy the ambience of pasted centuries and regional delicatessens.

The Portuguese Caminho de Santigo is still relatively preserved, since it was “rediscovered” only in recent years. It is an enriching experience that we are fortunate to share with passing pilgrims.

The Coat of Arms of Calheiros stands with five shells of Santiago and three stars. The shells of Santiago were a powerful symbol in the Middle Ages both of faith and military might, and are a display of the strong link of the family and the region. The three stars represent heavenly guidance towards Santiago but also a symbol of military power.

The shells are displayed in four corner shells and a central one towards which all the coat of arms converges. Legend says that this central shell signifies the strong energy of the Calheiros Estate towards which the world converges. In a way we can rightly say it is so, given the many visitors that the Manor has received from all around the world.

Paço de Calheiros is mentioned in the famous work Codice Calixtino from the author Candido Passos, as one of the important stops on the way to Santiago.

It is a modern version of the 12th century manuscript that book walks through ancient symbology and spirituality of the Caminho covering the main routes, and where Paço de Calheiros stands has one the places with strong spiritual energy.

The old Portuguese Way can be traced from Porto to Barcelos, to Ponte do Lima, then Valença where it enters Spain, through the city of Tui.

We produce the Vinho Verde with the grapes Loureiro and Vinhão.

This variety of wine is unique in the world, for it is what is called in portuguese Vinho verde / Green Wine. It has great digestive properties due to its special qualities. It is a fresh and fruity wine, very easy to drink due to its lightness.

The Loureiro and Vinhão are typical grapes from the region which are cultivated here for centuries.

The Loureiro usually acquires a lemony colour while the Vinhão acquires a rosy red.

Our production is Bio-Dynamic, which means that we use no chemicals throughout the process, achieving an astonishing wine.

The Estate has a very good conditions for wine, with high sunlight exposure, plenty of water and good terroir.

Distances to places of interest: