The Calheiros are an ancient Portuguese noble family whose origins are closely tied with the foundation of Portugal in 1143 and to the Manor House that carries its name, Paço de Calheiros.

The Coat of Arms of Calheiros stands with five shells of Santiago and three stars.

The shells of Santiago were a powerful symbol in the Middle Ages both of faith and military might, and are a display of the strong link of the family and the region. The three stars represent heavenly guidance towards Santiago but also a symbol of military power.

The shells are displayed in four corner shells and a central one towards which all the coat of arms converges. Legend says that this central shell signifies the strong energy of the Calheiros Estate towards which the world converges. In a way we can rightly say it is so, given the many visitors that the Manor has received from all around the world.

In fact, Paço de Calheiros stands in the medieval road to Santiago, and has protected and sheltered many pilgrims throughout the centuries. Nowadays, still serves this function welcoming many pilgrims by foot, horse or bicycle that stay in the manor and gather spiritual and physical energy for the journey to Santiago. 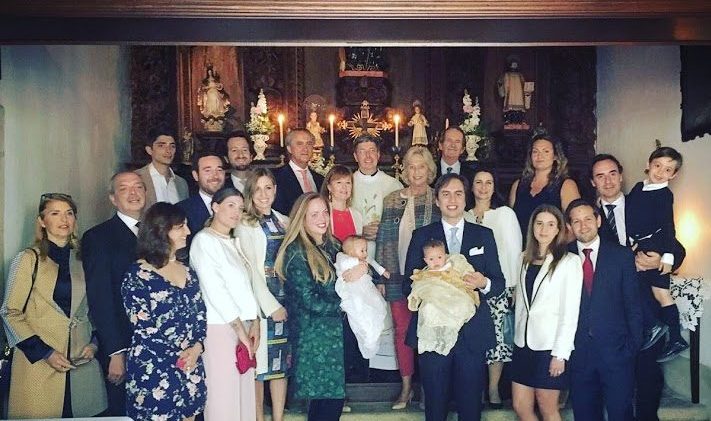 Throughout the last 800 years, members of the Calheiros family served the country in high offices of the government, in army and navy, in diplomacy and in arts and letters.

First references to the family come around the XII century, with the famous troubadour and poet Fernão Rodrigues de Calheiros, and Rodrigo Fernandes de Calheiros, military commander and companion in arms of Gonçalo Eanes da Nóvoa , Master of the Order of Calatrava.

In 1383 the death of King D. Fernando led to a dynastic crisis, and the Castilian King John I claimed the Portuguese throne and invaded the country with a large Castilian-French army. The war peaked in 1385 at the famous battle of Aljubarrota that ended with a stunning Portuguese victory by the great commander D. Nuno Alvares Pereira, later canonized Saint.

Martin Martins de Calheiros was by then the governor of the Castles of the cities of Guarda, Sabugal and Penamacor, all important frontier castles that played a fundamental role in the defense of the realm.

In the same year of 1385, Lopo Gomes de Lira the Governor of the castle and city of Ponte de Lima pledge is support to the Castilian king’s claim and refused to surrender the city. King John of Portugal brought his armies to the North of Portugal and sieged the city, during which the nobleman Garcia Lopes de Calheiros led a cavalry charge of 100 horsemen and had a decisive role in conquering the city. As a reward King John endorsed Garcia Lopes de Calheiros with all Royal Rights of the town and region as well as all the wealth confiscated to Lopo Gomes de Lira and his party.

By them the family controlled a vast dominion that included the city and castle of Ponte de Lima, the lordships of Calheiros, Santo Estevão, Beiral do Lima, Reguengo de Castelo and Terras do Burral.

In the XV century Portugal began exploring the oceans and expanding to what would later become its overseas Empire, with the conquering of the northern cities of Marrocco.

At the conquest of the city of Arzilla in Marrocco, Garcia Lopes de Calheiros (son of the latter), displayed such bravery that received the knighthood while still at the battle field.

His son Diogo Lopes de Calheiros was a military but also a writer and a poet that wrote the famous Memorial de Calheiros which is considered one of the main works in genealogy of the time. He describes the main families of the region in rhymes and verses, making it a unique work. He was also a military commander that was took part in the conquest of several cities in northern Morocco, and held the title of Almoxarife do Reino, which meant he controlled all  the supplies and treasury of the kindgom.

In the XVI century, Baltazar de Calheiros was Governor of the fortress of Goa and another member of the family, Francisco Lopes de Calheiros, became famous for capturing the first Dutch ship seen in the Indies, story told in the acclaimed work História da Índia – Década XIII of António Bocarro.

In Brazil at the end of the XVIII and beginning of XIX centuries some members of the family adopted the name Oiticica, a local Brazilian tribe name, as a token of support for the Prince D. Pedro and the independence from Portugal. By this time, António de Calheiros e Menezes was President of the Senate of Rio de Janeiro and one of the powerful members of the Court of King John VI.

Also In the XVIII century, the master architect António Pereira de Calheiros builds some of the most astonishing examples of Portuguese imperial and religious architecture, such as the Church of  São Pedro dos Clérigos, in Mariana, and the Church of Nossa Senhora do Rosário dos Pretos, in Ouro Preto.

In the beginning of the XX century Portugal participates in the World war I on the Ally side. After the war the League of Nations in formed, and Ambassador Francisco de Assis de Calheiros e Menezes leads that Portuguese delegation to the Conference. Later on during the Second World War, he saved many lives while Ambassador in Turkey.